Ranchi, the capital of Jharkhand is well connected to the rest of the world via Rail, Air and Road routes. The easy connectivity to the city is playing an important role in developing the city into a popular tourist & trading center. The tourists visiting the city can thus easily plan there tour by exploring the different modes of transport available, depending on their budget & time constraint. 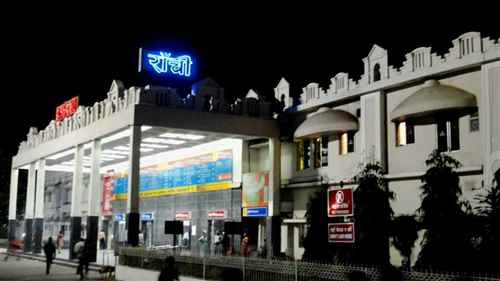 Hatia Station, Tatisilwai Station and Namkom Station are the other main stations of Ranchi. Hatia is a terminal station, some important trains start from Hatia station also. All basic facilities like water, rest-rooms, helpdesks, information counters are available on these stations. Vendors selling Tea, Coffee, Biscuits, and Other Eatables & Soft Drinks are present on the platforms.

Ranchi’s domestic airport also called Birsa Munda Airport (Code: IXR) connects the other part of India to the city. The airport is located in Hinoo, approximately 7 km (4.3 mi) from the centre of the city. Ranchi has direct flights from Patna, Bangalore, Delhi, Mumbai, Pune, Goa, Chennai, Jammu and Kolkata. Air India, GoAir, Indigo and Jet Airways Few are some of the major airlines which offer flight services to Ranchi city. The Ranchi airport has all the modern facilities. Since night landing at Birsa Munda Airport has been made free so that more flights are available to the metro cities in the morning.

The airport is managed by The Airports Authority of India, which has constructed three more parking bays, increasing the number of parking bays to 8. A new International terminal, spread over 19,676 square metres is now ready. The terminal has the capacity to handle 500 domestic and 200 international passengers at a time. Recently, to serve the pilgrims & reduce the burden on Kolkata Airport annual Haj pilgrimage flights to Saudi Arabia have also started from Ranchi airport.

Ranchi city is well connected through a network of roads to other parts of the Jharkhand. National Highway 33 and 23 pass through Ranchi. The Roads facilitate movement for both passenger and freight traffic. The regular service of the Jharkhand State Road Transport Corporation buses as well as those run by private operators connect Ranchi to the other parts of the state. Buses ply at regular intervals to Jamshedpur, Siwan, Rourkela, Dumka, Begusarai, Varanasi, Kolkata, Khagaul, Hajipur, Patna and other towns of neighboring states. Luxury buses from Ranchi to Gaya and Patna are also available. To reduce the growing traffic overload a new ring road is being constructed around the city. To ensure smooth flow of traffic three flyovers are being planned in the busiest areas of the city. The National Highways & other main roads are being widened to six lanes or eight lanes, to remove traffic congestion.

In 2010 a city bus service under Jawaharlal Nehru National Urban Renewal Mission was started to meet the increasing demands for public transportation. Nearly 150 city buses are operating in Ranchi at present. The Jharkhand Tourism Development Corporation (JTDC) is also contributing in managing the bus service in Ranchi. Auto-rickshaws and cycle rickshaws are also easily available & form a major part of public transport.

Ranchi, the capital of Jharkhand is growing & expanding rapidly. There are many options easily available to travel within the city. The city is well connected through a network of roads, so that inter-connectivity within the city is not a concern. The widening of arterial roads and public transport service connecting major institutions, station, airport and industrial areas form the integrated transport plan. A large number of Buses and Share Auto-Rickshaws ply in the city which provide easy public transport. One can also opt for private auto-rickshaws in Ranchi, at a slightly higher fare. Residents in the city also travel by their own cars, scooters, cycles, motor-cycles, etc.

Nowadays many women can also be seen driving around the city, be it going to the local markets, banks or picking the kids from school. The tourists are advised to take care of their belongings, while traveling by any means of public transport. It is recommended not to carry too much cash or important documents while traveling around. Ranchi thus has good transport facilities available, so that the visitors can explore the city easily, no matter where they stay in the city.

Ranchi city has a network of Buses which are well maintained and ply from one point in the city to another. The buses cover the entire city of Ranchi & are easily available at designated spots. Tourist if traveling by bus should make sure that they know their destination point & where to board & get down. The locals are always willing to help for any information regarding the bus –service. The Bus fares are very nominal depending on the distance of the journey.
The major Bus-Terminus of Ranchi City are:
• Birsa Bus Terminus (Khadgada)
• Ratu Road Bus Stand
• State Transport Bus Terminal (Overbridge)

Taxi service is also available in Ranchi city. Taxis with predetermined rates are a good option & may cost around Rs 600 to 700 for a day, depending on the distance traveled. The taxi service can also be booked from various online options available.

Auto-rickshaws form an important part of public-transport system in Ranchi. Here the auto-rickshaws do not run on meter but and drivers ask for a fixed amount. There are usually no separate night-fares.The Auto fares may range from Rs 15 to 200 depending upon the distance traveled. If you take a share auto, you just need to pay Rs 10- 15 only. One can easily avail Auto rickshaws during times of urgency and emergency.