The Subarnarekha river flows through the states of Bihar, Jharkhand, Orissa and West Bengal. It is also known as Swarnarekha river. The name ''Subernarekha'' means ''streak of gold'' or ''golden line''. It is believed that in earlier days, gold was mined from near this river in Piska village near Ranchi.


The Subarnarekha river traverses long distances passing through Ranchi, Seraikela Kharsawan and East Singhbhum districts of Jharkhand. The total length of this river is 470 kms (290 miles) and its banks are high and well defined. 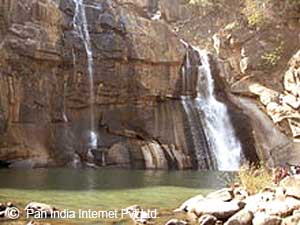 Subarnarekha river passes through Copper and Uranium mining areas which results in river pollution. Neighboring areas have been affected by floods many times.

Getalsud reservoir which was completed in 1971, is a multipurpose reservoir. It meets the water demand of people residing in Ranchi and nearby areas. It is 116 ft. high and houses two power houses. Another multipurpose project started in 1982-83 with the sole vision of irrigation, hydro power generation and supply of water.

The construction of Chandil dam and Galudih barrage across Subarnarekha was completed long back. Another dam has been constructed across Kharkai at Icha (near Chaibasa), two barrages at Galudih across the Subarnarekha and other across the Kharkai at Ganjia near Adityapur. This multipurpose project was started to assist the farmers of Bihar, Orissa, Jharkhand and West Bengal.

The nearby tourist places to the Subarnarekha river are:

The temple is 8 kms. from Digha and is situated at Chandaneswar (near Bengal and Orissa border).It is a temple dedicated to Lord Shiva. Many people visit this temple during Ganjan Mela and Maha Vishwa Sankranti.

Also known as Baleshwar, this city is located in Orissa. It is well known for Chandipur beach. It is the site of Indian Ballistic Missile Defense Program's Integrated Test Range (18 kms. from Balasore). The DRDO (Defense Research And Development Organization) has developed many missiles --- Nag, Agni and so on to name a few.

It is a Shiva temple located at Chandaneswar, Baleswar, Orissa. Oriya New Year, locally called ''Uda Parab'' or ''Nila Parab'' is celebrated with fun and frolic in the temple premises. Transport is available from Jaleswar (Orissa) and Digha (West Bengal).