Ranchi, the capital of Jharkhand is a today a very well-developed city, which is growing day by day. The city depicts a perfect balance of the old-world charm along with modern development. A large number of trading & shopping centers spread across the city add to its commercial value. The hills & the forests surrounding the city add to its scenic beauty. Due to the presence of reputed educational institutes, the city is considered as an educational hub, with nearly 74% literacy rate. Ranchi is considered as an industrial town with the setting-up of a large number of public sector enterprises like Heavy Engineering Corporation (HEC), Central Coalfields Ltd. (CCL), Mecon Ltd., etc. in the city. The captain of Indian cricket team MS Dhoni also belongs to Ranchi. Overall Ranchi is a city with all modern amenities to make your stay comfortable, in addition to its beautiful waterfalls, parks & other places of tourist attraction. 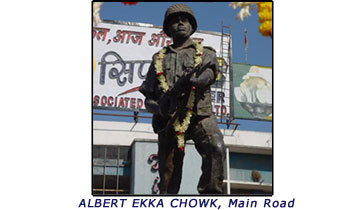 Important Localities and Residential Areas in Ranchi are

Central Mine Planning and Design Institute Limited (CMPDIL) is a colony located at Kanke Road, about 8.7 km from Ranchi Railway Station and 12.3 km from Airport. The colony with banking, shopping and sporting facility is a hot favorite destination to reside. Here you can find a branch of State Bank of India. From Schools to Playground, Community Hall, Tennis Court, Ladies Club (Mahila Sabha), etc. all are present inside its campus .

This cooperative society colony was formed for Senior Bihar Govt. employees in the year 1975. It is nearly 3 km from Railway Station and 4 km from Airport. There are 500 plots ranging from 5,000 sq ft (460 m2) to 12000 sq ft (type D to type A). Located in the heart of the city, the colony has 4 large parks and one temple in its vicinity.

This colony was established in 1990, especially for the employees of the Steel Authority of India Limited (SAIL). The colony has Residential Units, Parks, Basketball & Tennis Courts, Recreation Centre, etc. in its premises. DPS (Delhi Public School), a major school of Ranchi is also present here. A very peaceful and quiet colony with an enviable location.

Resaldar Nagar is located near Rajendra Chowk & Over Bridge. Established in 1975, it is a Muslim dominated area. Considered to be a very posh residential area for Muslims, most of the people are literate. The area is named after a Baba called Resaldar, a huge fair is organized every year in the remembrance of Resaldar Baba. There is a big Mazaar (shrine) & beautiful mosque here. One can stroll in the large lawn besides the lake and enjoy the ambience.

Bariatu Road is a posh area in the Ranchi city. It is about 15 minutes distance from Ranchi railway station and at 30 minutes distance from Ranchi airport. Being centrally located, markets, schools, hospitals are nearby & it has easy connectivity with rest of the city. It is posh area, big society connecting various routes. Due to the presence of Medical College (RIMS), Doctors Clinics & Medical Stores, the area is also known as ‘medical hub’. Bariatu Road is a premium residential area, with popular landmarks like Gymkhana Club, Games Village, RIIMS Hospital, Mini Malls in the vicinity and sprawling natural views across hillocks.

Doranda ('duran' meaning song and 'daah' meaning water in the Mundari language) is located in the old city of Ranchi. This place is of historical importance and was connected to the Sepoy Mutiny. This was the site of the old village of Archi.

Lalpur Chowk (chowk is a Hindi word meaning intersection) is located at the intersection of Circular and Old Hazaribagh Road. Lalpur is centrally located with a number of commercial & residential spaces. A large number of Students frequent this area, because of the presence of reputed colleges like Ranchi Womens College, BIT Extension, Coaching and Computer Institutes. The area is well connected with Katatoli, Kokar, Main Road. The major residential areas around Lalpur Chowk are BSNL Colony, Burdwan Compound, Lower Burdwan Compound, etc. All national as well as private banks have branches in this area. Lalpur Chowk has now emerged as the fastest growing areas of Ranchi, leading to a substantial hike in property rates.

Burdwan Compound is named after the estate of the king of Burdwan, a district in West Bengal. It has a large concentration of Bengalis residing here.

Established during 1960, Harmu Housing Colony is one of the biggest residential areas of Ranchi. Since those times the area has rapidly expanded & currently has a number of commercial establishments, government offices, schools and hospitals, etc. besides the residential units. The house of India cricket team’s captain MS Dhoni is located here. The prices of property are very high here.

An important residential area of Ranchi, this colony is also known as Netaji Nagar. The colony was developed to o rehabilitate the refugees from East Bengal after the partition. In Kantatoli Colony or Netaji Nagar the culture of East Bengal is still prevalent & is well- known for its many cultural events and Durga Puja celebrations.

AG Co-Operative Colony is posh locality in Ranchi, with high property rates at an all-time high. It has a Children Park which nurtures budding cricketing talent.