Ranchi, the capital of Jharkhand is fast growing into a modern city. Due to the rapidly growing employment opportunities and setting-up of numerous commercial establishments, offices, banks, and MNCs, people from neighboring villages & towns are making a beeline for the city. The population of the city is thus increasing day by day, & the city is expanding to meet this demand. The tribal communities living here, also add to the diversity of the city. To get respite from the hustle-bustle of busy city life, the city offers many entertainment centres, eating joints, shopping centres and more. Trees planted on the streets, beautiful parks & magnificent waterfalls add to the scenic beauty of the same. The whole city is well-connected by road, air & rail to other parts of the world. Thus Ranchi, is a beautiful, quaint little city which offers all the modern amenities to live your life comfortably.

Ranchi, is a cosmopolitan city, where people from all religions live together in peace & harmony. The people of Ranchi lead a disciplined life. They are very sincere and hardworking. The literacy rate is quiet high in the city as people endeavor to provide the best education to their children. Traditional family values & customs are still rooted . The people of Ranchi are simple, family-oriented & fun loving people. All the festivals are celebrated with much fan-fare & enthusiasm in Ranchi. Tribal people with their traditions and culture add to the colors of the city.


Influence of Western Lifestyle in Ranchi

Culture and Tradition are very deeply embedded in the lifestyle of Ranchi. The people of the city have always been cherishing their rich culture and heritage. But the influence of western lifestyle can be seen in the city. The youth of the city can be seen enjoying this western lifestyle, with easy availability of all modern amenities. Western clothes like T-shirts, Jeans, Skirts, etc. are gaining popularity amongst the residents of the city. Many modern shopping malls, multiplexes & branded showrooms have opened in Ranchi, and people flock to these places to spend their free time. The influence of Western culture can be seen, in terms of food, lifestyle & entertainment choices of the people of Ranchi. The advent of western culture has also left a mark on the tribal population of the city, who are fast adapting to the modern lifestyle of the city. Children & youth are well-aware of the latest gadgets & products available in the market. 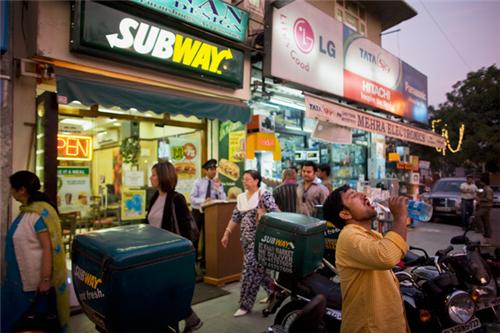 Nowadays many Beauty Parlours, Spas, Health centers have opened up in Ranchi city. The residents of the city have realized the importance of appearing well-groomed & often visit these places. Yoga and alternative healing therapies are gaining popularity, and now people have begun to understand the benefits these things can provide to the mind, body and soul. People, especially females are becoming more independent. The Ranchi city due to the advent of western culture, has become more liberal, modern & cosmopolitan in nature, in the same time retaining its traditional values & culture. 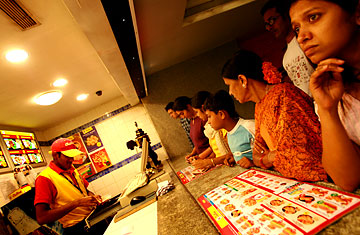 Fast food has become very popular amongst youngsters in Ranchi. One can easily find fast food joints like Pizza- Hut, Subway, Dosa Plaza, KFC, Cafe Coffee Day (CCD), Dominos, Moti Mahal Deluxe Restaurant in Ranchi city. Dishes like Pizzas, Burgers, Chowmein, etc. are relished with much delight. Momos is also liked by many as a quick snack. GEL Church complex and Roshpa Tower in Ranchi are places which have many fast food restaurants. Besides the traditional dishes of the city, Chinese, north-Indian & continental dishes can now be savored easily at the city’s many restaurants & eating joints. Preference of the local population is taken into account while serving the food. Many restaurants are also giving an option of home delivery, thus increasing demand. The fast food culture in Ranchi city, has thus evolved with the changing lifestyles of the young population.

According to the 2011 India census, the total population of Ranchi city was 2912022 thus making it the second most populated city in Jharkhand State after Dhanbad. Total population of Males in the city is 1493363 and females is nearly1418646. The average literacy rate in Ranchi city was nearly 77.13 %. After the formation of separate state of Jharkhand in 2000, there has been a consistent increase in population of the city. Thanks to the the rising employment opportunities that have attracted people from across different regions towards Ranchi. Ranchi has been ranked as the highest employment generating Tier-III city in India, as per a survey conducted by ASSOCHAM in 2010.


Health and Fitness Centers in Ranchi

Due to growing awareness of the people of Ranchi, towards health & fitness, Ranchi city is witnessing a boom in the health & fitness segment. Many Health and Fitness Centres, Gyms, Spas have established shop in the city. They are offering services like aerobics yoga, pilates, self-defence classes, weight loss, muscular development, and overall health management. The people have understood the many benefits of gym workouts to get in shape and lose weight the healthy way. Ranchi now has nearly 15 properly equipped gyms, besides many small fitness centers.The men, especially the younger lot, form a large share of the crowd, recently women, too have started frequenting these fitness centers to get that perfect figure. 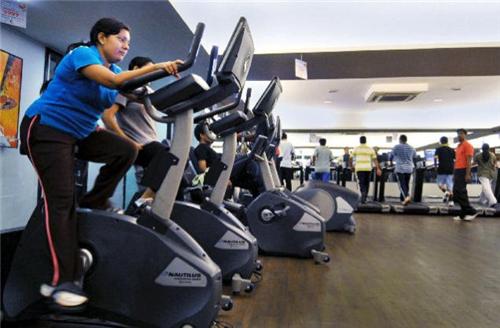 Many young & old, especially the working professional are joining these health & fitness centres to keep themselves healthy & fit. The Health & fitness centers in Ranchi are safe & affordable thus people join here easily. The centers are run by certified instructors who provide guidance at every step & train the people on different fitness techniques.


Entertainment and Nightlife in Ranchi

Ranchi is gradually opening up to the night-life culture. The city lacked a vibrant nightlife as most of the shops & restaurants used to shut by 10 pm. However due to growing public demand many places where one can enjoy till late-hours have opened-up in the city. One can shake a leg or relax with a drink at a couple of bars in the city. The youngsters hang out at Albert Ekka Chowk where they get tempting street food. Dhabas located on Mahatma Gandhi Road, Circular Road and Kanke Road serve delicious food even after 10 pm. People gather in small groups, discuss local issues & enjoy tea & snacks at bus stands and railway stations of the city till late at night. One can easily enjoy night shows at Multiplexes & in the city.