Ranchi, the capital of Jharkhand state has a fascinating history to narrate. The geographical area now of comprising Ranchi district was formerly part of old Lohardaga district of the British India. The city has been a witness to ancient, medieval and modern periods. From the Mauryan & Tribal rulers to the British Raj, the footprints of Ranchi’s glorious past can be felt across all corners of the city.

Some believe that the city got its name from a mountain bird called 'Ranchi', while others believe that the city drew its name from Archi, a Oraon village. It is said that once a farmer has an altercation with a spirit. It went long and annoyed the farmer who started beating spirit with his bamboo stave. The spirit shouted archi, archi, archi and vanished. Archi became Rachi, which became Ranchi. Doranda one of the suburb of Ranchi was place of immense importance during British raj. Civil station, treasury and church were established by the British Raj which later on were destroyed by rebel forces during the Sepoy Mutiny.The present Purani (old) Ranchi is believed to be the site of the old village of Archi.

Earlier Ranchi District was known as Lohardaga, which had come into existence after the creation of the non-regulation South - West frontier (Kol rising) in 1831-32. The name of the district was changed in 1899 from Lohardaga to Ranchi. A detailed account of Ranchi's history is given below:

According to Mahabharata, a powerful Kshatriya rulers named Hanimuku and was in the direct control of Jarasandh, the king of Rajgir. Later Ranchi became a part of the Magadha Empire, but was subsequently conquered by the Mauryan Empire. After the decline of the Mauryan Empire the Guptas began to rule the region. Eventually, the legendary King Phanimukut, who started the Nag Dynasty, established the Kingdom of Chotanagpur & ruled the area for a considerable time. The Munda and Oraon Tribes, the native tribal people also ruled the region. The old Ram Temple in Ranchi was the royal palace of the Munda Rajas.

After Akbar’s succession on the throne of Delhi, the Mughals started penetrating the Chota Nagpur plateau area. They were was the first external power to make their mark in this area. In the year 1585, under the guidance of Akbar the brave warriors demolished the forces of Raja of Kokrah & captured the region. After the demise of Akbar in 1605, the area gained its independence again under a tribal king called Durian Sal. However a few years later Mughal empire regained authority, under the administration of Jahangir. The then governor of Bihar, Ibrahim Khan was asked to recapture the region. Around 1772, the East India Company, established its rule here.

In 1757, after gaining victory in the Battle of Plassey, the region including Ranchi and the nearby precincts came under the British Raj. The Maharaja of Ramgarh was appointed to look after the administration of the district. This new change of rule was not accepted by the local independent rulers 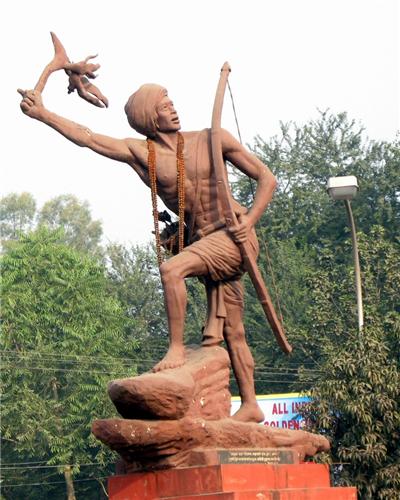 of the region. To combat this in 1833, the Britishers came up with a peace treaty by forming a region called as the South-Western Frontier Agency. Lohardaga was the capital of this new region which included Ranchi and other neighboring districts. Afterwards the capital of this newly formed region was relocated to Ranchi & was administered by a representative of the Governor General until 1854. In the beginning of 1857 there was a major unrest in the region. The farmers revolted due to unreasonable practices enforced on them like begari (forced labour) and increase in rent by the landlords. This resulted in the Sardari agitation. The agitation intensified when many Mundas and Oraon farmers stopped paying the rent to the landlords. In the year 1895, The Sardari agitation or the famous ‘Larai’ as it was called was at its peak when Birsa Munda (a socio-religious revolutionary) came at the fore-front to oppose the British Rule. He played an important role in the freedom struggle & was honored with the title of ‘Birsa Bhagwan’.

Ranchi district was a witness to several revolutionary campaigns & anti-British crusades during the Indian freedom struggle. It became an important center of work for the Revolutionary party under the guidance of Ganesh Chandra Ghosh. The people of Ranchi actively participated in non-Cooperation movement & other events which finally led to independence. After gaining independence in 1947, Ranchi constituency was integrated with the state of Bihar. The Jharkhand state was formed on 15 November 2000 & Ranchi became the capital of the state.