Dance and Music in Ranchi

William Shakespeare referred to music in Twelfth Night and remarked,"If music be the food of love, play on...'' This stands true for the people of Ranchi, especially the tribal population of the state, who rejoice and celebrate each festival dancing and singing to the beats of drums. They enjoy dancing in groups with very simple dance steps synchronizing with the beats and tune of traditional musical instruments. Music is an integral part of prayer, festivals and entertainment.

Domkach, Janani, Jhumta, Pahil sanjha, Mardana, Adhratia and Vinsaria etc. are some musical forms prevalent here.The languages used in Jhumar songs are Oriya, Bengali, Hindi, Maithili and Nagpuri.The 'baijis' perform ghazals and thumris moving from one place to another getting paid according to their level of skill and accomplishment in musical field. 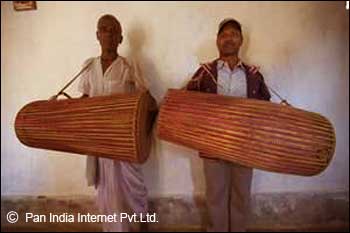 Martha Graham has said, "Dance is the hidden language of the soul.'' The dances entertain people and uplift their moods. They serve as a  welcome break from everyday monotony. They also give a glimpse of culture and traditions of the state, its history, heroes, freedom struggle, Gods and convey folk lures in a simple manner. Some dances of this region are Paika, Chhaw, Karma, Jhumar, Natua, Agni, Nachni, Ghatwari, Jamda, Jadur, Jaudra, Choukara, Bheja, Santhal, Matha, Sohrai, Sharhul etc. Most of these dances are performed by tribal people of this region wearing colourful costumes. 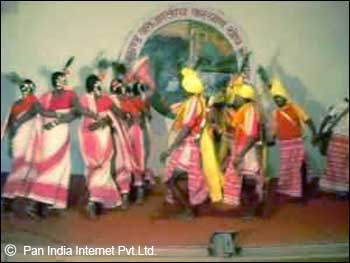 It is performed during Holi festival. The dancers throw coloured water and ''gulaal'' on one another to share their happiness.Women also participate in this dance form.

This dance is performed by males.It is named after conventional soldiers who were called by similar name.It is basically an amalgamation of martial arts and simple dance steps. Shahnai, narsingha, bheir, nagara, dhak and nagara drums ('dholak') are used as accompaniments in paika dance. Men hold weapons like sword and shield while dancing. Paika is performed on occasions like marriage and festivals.

In Chhaw dance, traditional instruments such as jhanj, mohuri, turi, bheri, bansuri and nagara are used. The dancers cover their faces with a mask and give more importance to head, neck and body movements. This differentiates this dance form from other dances in which facial expressions are given more significance. Chhaw dance is also performed in certain parts of Orissa and Chhattisgarh. It is generally performed during night in an open field with ''mashaals'' (fire poles) surrounding the area. Nowadays, electric lamps are used for this purpose.

Folk music and instruments like jhumki, thumki, challa and payri are used in karma dance. The dancers celebrate and dance in a group, standing in a circle with their hands around each others waist. Lahsua and Khare are different forms of Karma dance. Karma festival is believed to bring good luck and prosperity. People plant karma trees during this time.

Jhumar dance is mainly about love and romance. It is performed during harvest time, festivals, marriage and fairs. The dancers form a circle and perform this dance. The leader of the dance group is called ''Rasik'' and the other performers are called ''nachunis''. Jhumar is performed in Ranchi, Hazaribagh, Dhanbad and Singhbhum.

Centres for Learning Dance in Ranchi: