The cuisine of Ranchi, just like its rich traditions and natural resources, is tasteful and aromatic with love as an ingredient in all the dishes.The famous dishes of this region are bihari litti, khichri, suran chutney, pittha, dhuska, charpa etc. Green leafy vegetables or ''sags'' such as palak, sunsunia, methi, bathua, sarson, gendheri, saranti, chana and beng are also consumed on a regular basis. People relish cooked flowers of drum-stick, august and jhirool. Other preparations include mitha khaja, gatte ki sabji, kala chana, ghoogni, thekua, til barfi, aloo chokha, chana daal khichri, pua and  nenua with chana.
Daily meals consist of phulka (roti or chapati) daal, bhaat (rice), tarkari (cooked vegetable) along with achaar (pickle). Sometimes saag (fresh or even dried) is boiled in starch obtained from cooked rice and consumed as ''maad jhor''. Daal is given ''chonkha'' to render it tasteful and colourful. ''Panchphoran'' is used which is a mixture of ajwain, sarson, methi, saunf and mangraila.
Among non-vegetarian dishes, spicy chicken, fish and  meat preparations are enjoyed by people. Mostly, mustard oil is used for cooking meals.
Local alcoholic drinks include ''handia'' (rice beer) which is consumed by males and females both during occasions such as marriage. Another drink ''mahu'' is prepared from fruits and flowers of mahua tree.
Fruits such as jack fruit, various varieties of mango, litchi and blackberry are found in abundance in Ranchi. Fresh vegetables are available in market.

Some Common Dishes in Ranchi:

This dish is also known as ''khajoor'' and is prepared by mixing sugar, wheat flour, chopped coconuts and dry fruits. People carry thekuas while going on a journey as they can be stored for quite some days without getting spoilt. It is also prepared during ''chhath puja''.

Rice is mixed with  yellow lentils and cooked. Later, it is served with yoghurt, coriander chutney, ghee, papad and achar (pickle). 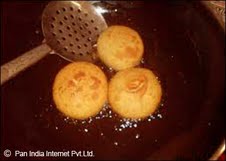 Green chillies, wheat  flour and sattu are ground together and dough balls of medium size are made. They are then fried on medium heat and later baked. Litti is served with alu bharta or baigan bharta.

It is prepared during festivals. Flour is kneaded with jaggery water. Sweet 'khajas' are prepared by frying in oil. These are crispy and stay fresh for many days in air-tight containers.

It is prepared using mashed rice and different pulses.

Rice is mashed, fried and mixed with various spices.