Art and Culture in Ranchi

The culture of Ranchi reflects an integration of various prevalent culture of the city. People belonging to different religions & communities live here in harmony & brotherhood. The hospitality & warmness 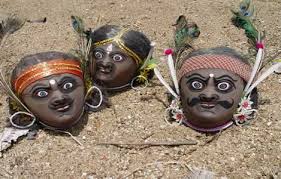 of the locals leave an everlasting impression on the tourist and visitors traveling to this place . Though the city has grown into a well-developed modern city the old traditions are much valued here. Art & culture also hold a special place in the city, many reputable artists belong to this place.
Traditionally Ranchi has been home to many tribal communities. These tribal communities have been responsible for developing and influencing the art and culture of Ranchi. The colorful ethnic clothes and intriguing customs of tribal people are sure to attract the tourist’s attention. Traditional dance and music is played on several occasions like festivals, weddings & community celebrations.

The most common religions followed in Ranchi are Hinduism, Jainism, Buddhism, Islam and Christianity. Ranchi district has nearly 41.8 – 44.6 percentage of tribal population. The tribals follow their own religion - Sarna religion/Sarna Dharam. They have their own worship place called "Sarna Asthal/Jaher" religious flag called "Sarna Jhanda”. During the Sarhul festival every Oraon gather in Ranchi & organise a rally or procession. At this time the “Sarna Jhanda” can be seen everywhere in Ranchi. However many tribals have converted to Christianity now-a-days.

The traditional dance forms of Ranchi and its surrounding areas depict warrior-like movements of battles fought in ancient times, animal and bird behavior. The dances depict different emotions like joy, sorrow & anger. The dancers convey these emotions beautifully through these dances. Some of the popular dance forms of this place are: 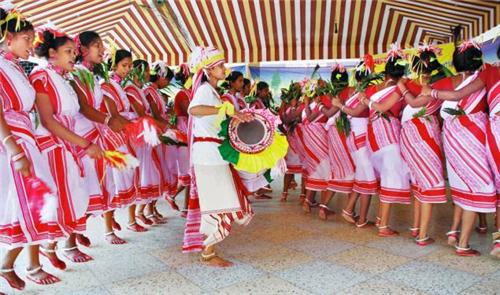 Chhau- The word is derived from the Sanskrit word Chhaya meaning shade, image, or mask. It is vibrant dance portraying the daily activities of the tribal folk –working in the fields, in the forests, in their homes, etc.

Santhal- It is a group dance performed by the Santhal tribes of this region, during all festivals and special occasions. The dance reflects the culture and traditions of the local tribes. Colourful costumes & body decorated with flowers are the main attractions of this dance form.

Karma- Karma is another popular folk dance of Ranchi and its nearby areas, performed in the month of August during the Karma festival. The name has been derived from a tree named Karma which symbolizes good luck and prosperity and hence is considered sacred. 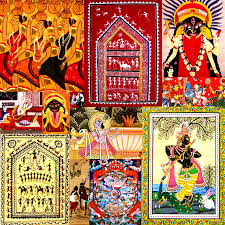 Ranchi & its nearby areas are rich in traditional tribal artifacts. Local artifacts made of bamboo, wood products, toys and metal craft and pottery is much appreciated & make for a good buy. The traditional ‘Paitkar’ paintings, tribal ornaments, masks and baskets and stone carvings are difficult to find in markets now-a-days, but if you enquire from the local people, they may be found.

Paitkar’ Paintings : Scroll painting or Paitkar is a specialty of the tribals, but due to lack of support it is difficult to find these days. You will be amazed to see the work of the artisans depicting various features using natural colors.

Sohrai Art: Sohrai is the art form depicting bulls, horses with riders, wild animals, trees, lotuses, peacocks, and horned deities. These images are painted using twigs & branches of trees on the walls using the most natural form of coloring, red, black, yellow and white earth. Married women mostly draw these images during festivals & harvest time.
Other Forms: Oraon Bhitichitra, Santhali Bhitichitra and Jado Patiya are the styles of paintings that can still be found today & common among tribals.

So right from the rich culture & tradition to the beautiful picturesque locations, Ranchi has an abundance in all. Thus Ranchi, is a favorite tourist spot for the people who love to travel and explore different places of India.